Many people don’t know this, but I started Bar Patrol as a liquor inventory auditor business, which meant I was providing full bar inventory service for dozens of bars around the San Francisco Bay Area.

Bar & restaurant owners paid me well for this service because:

1. They hated counting the bar inventory (let’s call a spade a spade)

2. It freed up time for them to grow the business in other areas

3. It saved them a boatload of money and instantly increased their pofits

Most commonly I counted inventory for them once per week. I then uploaded their sales data into Bar Patrol and ran a variance report to find out how much money they were losing and which brands were being over-poured the most.

To land accounts, I offered to do the first week for them for free, because I knew the variance would ALWAYS be over 20% and they would be losing thousands of dollars and this would prompt them to hire me to find the leaks and plug them so that the reservoir (their bank accounts, for those of you getting off the slow train) would start to rise.

Don’t fret, I’m getting to the point. I am fully aware that you clicked on this article for some specific information, which you have yet to acquire.

After showing the bar staff how poorly they were pouring, the variance the following week would drop to around 5%. There is great power in knowing you are being observed.

However, on rare occasions the variance wouldn’t drop (or wouldn’t drop as much as it should) and this was usually because some smarty-pants working behind the bar would realize that with bar inventory counts only once per week, it would be impossible for me to know who was giving away the alcohol, even though I knew it was happening.

The Magic & Joy of Spot-Checking

So in order to identify this loose cannon, that meant that I needed to perform a separate audit before and after individual shifts in order to isolate who was defying the system.

Now, I hate to admit this because being a liquor inventory auditor was my profession, but when I first started doing these individual audits, I would count the entire bar inventory.

That means I was counting the dusty bottles of Berenjager back in the storage room, along with everything else. Twice. Within a few hours. And we all know how fun counting inventory is in the first place, right?

It took me a few times to realize that all I needed to do was determine 5 or 10 of the highest selling products (beer, liquor & wine), count those items before and after the shift, and then run a variance report for just those items.

Here’s something else I hate to admit, but once I realized I could spot-check, I loved it. Meaning, I loved the idea of being to catch the renegade-in-question red-handed.

Like I was an FBI agent going after a felon, except in this case I came armed with a bluetooth scale instead of a Glock, and instead of bringing down a guy selling heroin to 13-year-olds, I was bringing down the guy over-pouring Jack Daniels to his friends.

And it worked! Every time. I was able to find the perpetrator and bring him to the owner, who then had to decide what the repercussions would be. A write-up. Firing.

It varied, but it wasn’t like they hadn’t been warned, so to have the unmitigated arrogance to ignore that warning and continue to give away the owner’s products, it felt nice to catch the thief and bring it to a stop.

So enough story-telling, let’s get to the spot-checking process so that you can do the same.

How to Spot-Check Your Bartenders in 4 Easy Steps

Another question that may have popped up in your mind while reading this is: “How often should I take a full inventory then?”

I recommend doing it just like I did: Take one full inventory once per week, on the same day every week. That way you can then do your ordering based off that inventory, and you can also run a variance report for the week.

Then, three to four times per week, do a spot-check without the bartender-in-question knowing you’re doing it.

Here we go. If you’re getting sleepy and your brain is tired from reading, you can watch the video on this process here:

For this example, we’ll just take four popular selling liquors: Ketel One, Jack Daniels, Jameson and Grey Goose. And we’re going to spot-check Ralph, who is working a night shift by himself on a Tuesday night.

When choosing your products, you can choose beer, liquor or wine, or a combination of them. Your list should have at least 25 of your top-sellers (or more, even) since the plan is to do spot-checks every week, and if the bartenders figure out what you’re spot-checking, they will just give away something else. 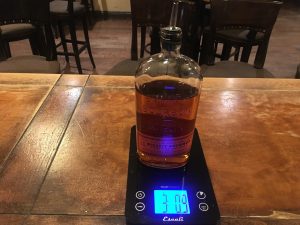 You’re going to want to count this inventory before Ralph’s shift. Hopefully you have slower days or nights in which just one bartender is on so you can isolate them.

When doing inventory counts for just one shift, it’s best if you can weigh the bottles, as it is the most accurate method for tracking your bar inventory. It’s difficult to point count and determine how many shots they actually poured.

With the Bar Patrol bluetooth bar inventory scale, you’re able to track pours down to the 1/100th of an oz.

Next, have the list of products you are counting in front of you so there’s no confusion. Then, you must make sure that you remember to count every single location in your bar so you don’t miss anything.

I know it sounds obvious, but you have to pay close attention to details here so you don’t miss anything, because when you go to run the reports and scrutinize your bartender, you want to make sure the data is accurate.

If you have a good bar inventory app or system, all the products you counted the first time will appear

If you have a good bar inventory app or system, all the products you counted during the first inventory will appear in order, from location to location, which will make it fast and easy.

If you’re using a spreadsheet, make sure you have all the locations written down so you don’t miss anything. Follow the same pattern you did during the first inventory.

Even if bottles were moved and stocked, it won’t matter as long as you count all locations again. Remember, you’re only counting a few products so it shouldn’t take you more than 5 or 10 minutes.

We’re counting this second inventory so we can determine the usage and how much they poured during their shift.

The data in this case is measuring sales (what Ralph rang in) vs. usage (what Ralph actually poured).

For manual spot-checking, it will be easier to spot-check things like wine and bottled beer. There are only about 4 glasses of wine per bottle so it’s much easier to get an idea of how much was given away. Not so with liquor where the shots are much smaller.

Having a quality bar inventory system in place allows you to simply upload your sales data and run a variance report. That’s it.

For your sales, simply run a sales data report in the back-end of your POS for that shift. If the bartender you are spot-checking came on at 4:00 and closed at 11:00, that’s the time-period for your sales data. It would look something like this: 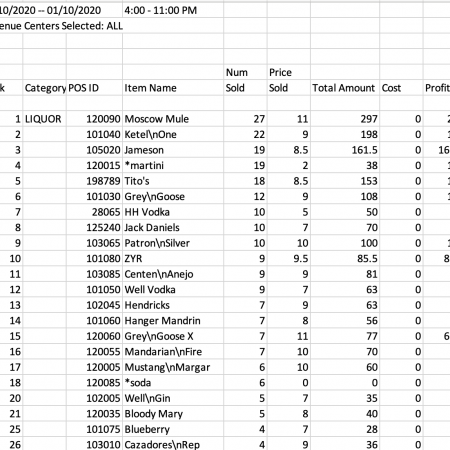 In this example, you can upload this sales data and then run a variance report and only the products you counted will show up on the report, so you don’t have to sift through the rest of the sales. The system will identify only those products and cocktails that have been rung in and contain these products (in our example) Ketel One, Jack Daniels, Jameson and Grey Goose.

If you’re unsure what variance is, it equates to what is physically missing. So Ralph, during his shift, gave away 21% of your profits. Jack Daniels is the worst, perhaps because you have a good-tipping regular coming in to see Ralph because Ralph hooks him up. Variance for Jack is at 39.55%. $116 lost at retail, just for Jack Daniels. Now it’s time for the final step.

Steps 1 – 4 are worthless if you don’t do step 5, which is to sit down and communicate with the bartender who was spot-checked.

There is powerful magic in monitoring and communicating with your staff, which you can read more about here. When you sit down and show them how much money they are giving away, and that you know they doing it, the variance instantly shrinks to single digits and you save A LOT of money.

It’s not time to recoil here. I know many owners and managers who don’t want to be the bad guy and confronting bartenders about their over-pours is something they’d rather avoid, but this is your business, not theirs.

It’s your job to be that FBI agent and track down the wrong-doers who feel justified in siphoning your money for their own benefit. In other words, stop being a bar owner and start being a business owner.

I hope this helped. If you want to learn more about Bar Patrol Inventory App and how it works, click here to watch the demo video.

I’ll see you next time,

Get awesome tips, tricks and strategies to help you become an undisputed expert at running your bar & restaurant.